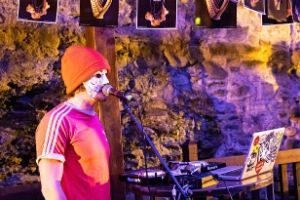 The is great history and culture in Killorglin, which is best known for Ireland’s oldest festival, Puck Fair, which started over 400 years ago! Puck Fair happens every August 10th, 11th & 12th, we promise, you have never seen anything like it! K-FEST is a multi-discipline Music & Arts festival that started in 2013 and happens annual on the June Bank Holiday weekend. Biddy’s Day is an ancient Celtic festival celebrated annually in February.

Killorglin is also home to Christmas in Killorglin and a wonderful St Patrick’s Day Parade.

There is great history in the town of Killorglin, when you are visiting be sure to visit Ballykissane Pier the site of the first fatalities of the 1916 rising. The Old Metal Bridge was part of the old rail line that ran from Tralee to Valentia and was constructed in 1885, it is now a pedestrian bridge that is a lovely choice for a walk. The ruins of Castleconway also make up 1 wall of our beer garden!

This website uses cookies to improve your experience while you navigate through the website. Out of these, the cookies that are categorized as necessary are stored on your browser as they are essential for the working of basic functionalities of the website. We also use third-party cookies that help us analyze and understand how you use this website. These cookies will be stored in your browser only with your consent. You also have the option to opt-out of these cookies. But opting out of some of these cookies may affect your browsing experience.
Necessary Always Enabled

Any cookies that may not be particularly necessary for the website to function and is used specifically to collect user personal data via analytics, ads, other embedded contents are termed as non-necessary cookies. It is mandatory to procure user consent prior to running these cookies on your website.